Kilbeggan Distillery, is Ireland’s oldest licenced distillery. Operating today under the ownership of Beam Suntory, this micro distillery and visitors centre boasts two copper pot stills, that quietly produce some of the most interesting distillate in the country.
Many of you will know that last year, Kilbeggan was the first of the modern Irish whiskey world to release a rye whiskey to the market. Those in the known, will have known that this was actually a Single Pot Still distillate that was distilled before the Irish Whiskey Technical File was written and by the time of bottling unfortuantely fell outside the realm of what the current technical file will allow to be called “Single Pot Still”, due to the whiskey’s mashbill (recipe).

By the current technical file, any grains added to the mashbill, outside of barley, cannot exceed 5% of the recipe. The aforementioned rye whiskey boasted a healthy 30% rye in the mashbill. 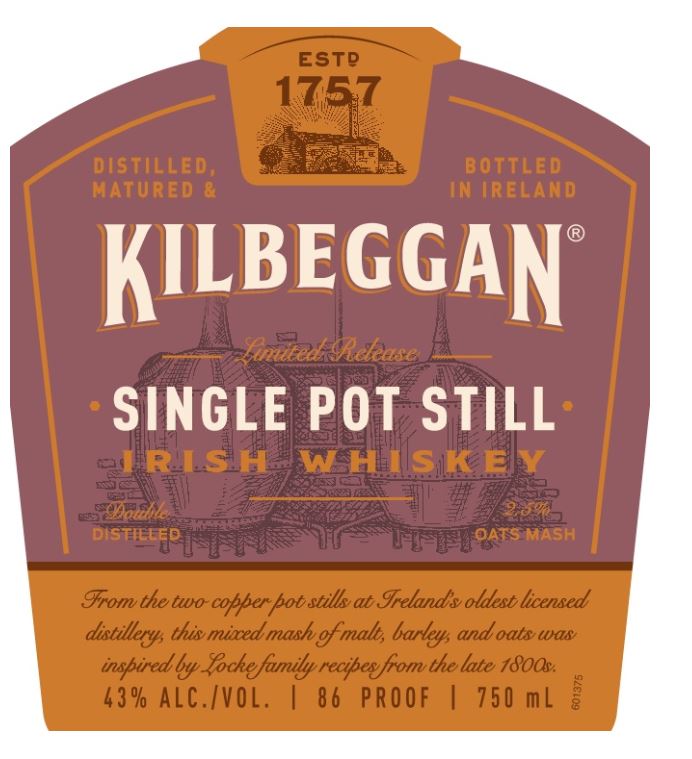 Now, Kilbeggan are bringing a Single Pot Still to the market once again, although, this time they are adhering to the strict technical file.

This Single Pot Still whiskey has been matured exclusively in ex-bourbon barrels, and boasts a decent 3% mashbill of oats, although, there is no word yet on the malted barley vs unmalted barley content. We approached Beam Suntory for comment on the mashbill and, unsurprisingly, they were tight lipped on the matter. We will have to see what the press release denotes on release.

Thankfully, we will not have long to wait for Kilbeggan’s Single Pot Still as the first release is due on Irish shelves by the end of the year and they are expected to be on the shelves across the US by Q1 next year. The whiskey will be released at 43% ABV or 86 Proof.

The back of label tasting notes boast a whiskey with soft, mellow flavours, with a warming palate of citrus, summer fruits, fresh mint, and a lingering spice that precedes a rich, creamy finish influenced by the oats.

Full Potstilled tasting notes will be online upon the whiskey’s release.

Matt Healy, Chief Editor of Potstilled.com Read more in the about section. View all posts by Matt Healy

Matt Healy, Chief Editor of Potstilled.com Read more in the about section.